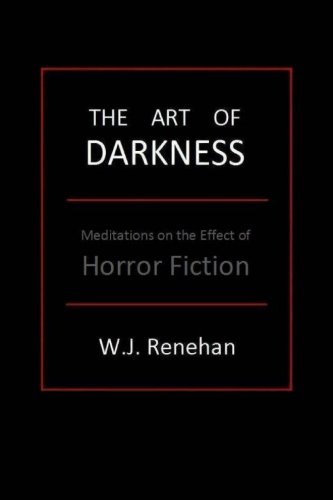 The introductory chapter to W.J. Renehan’s The Art of Darkness: Meditations on the Effect of Horror Fiction –

Why is it that we so often turn to works of horror fiction as a source of entertainment when they should, by all rights, turn us off completely? Why should we pay good money to be scared out of our wits? The most obvious answer to this would be the adrenaline rush we get from it, but to chalk up the attraction of horror to this alone would be to only skim the surface of the genre’s dark waters. Works of horror have myriad implications when considered from psychological, sociological, and philosophical standpoints, and perform numerous functions in regard to both personal and collective experience. Allowing for the simultaneous gratification and abreaction of tabooed desire, the simultaneous fracture and reinforcement of social, sexual, and moral codes, such fiction has persisted in cultures the world over as a stabilizing force—a means of fostering both individual and collective growth while also acting to maintain the status quo. The benefits of horror are undoubtedly subtle and largely overlooked, yet their value cannot be overstated. Before we delve into the means by which horror fiction affects us, let us first develop a clearer conception of its ends.

As a state of intense physical and cognitive agitation, horror is capable of temporarily inducing what is known as regression, in which one reverts to an earlier, more primitive stage of psychological development as a means of coping with overwhelming fear/anxiety. Horror fiction provides a kind of psychic relief in this manner, in that it allows for the experience of fear without presenting any actual physical or psychological threat. Valdine Clemens notes that “Such fiction provides an antidote for the excessively cerebral consciousness, the devitalized state that Thomas Hardy called ‘the ache of modernism’ and to which D.H. Lawrence referred—anticipating modern media jargon—with the term ‘talking heads’” (Return of the Repressed, 2). As an atavistic experience, horror serves to reconnect us with our primal selves, provides temporary respite from the droning conditions of modern life, and facilitates a process of self-reevaluation in regard to the conditions of our existence. The initial shock is merely the tip of the iceberg.

Images of horror fascinate due to their effect as representations of what psychoanalysts term the “uncanny”—repressed desires of the personal and collective unconscious. As Noël Carroll asserts: “the horrific images of this genre represent compromise formations. Their repulsive aspects mask and make possible various sorts of wish fulfillment, notably those of a sexual sort” (The Philosophy of Horror, 170). Shock and repulsion are simply the price we must pay in order to play out these repressed desires, and thus horror fiction generates a kind of cognitive dissonance, in which we find images/situations to be foreign, yet familiar; repulsive, yet attractive; disturbing, yet somehow intriguing. This paradox is essential to understanding the various benefits of the genre’s effect, as it explains why we would subject ourselves to such material in the first place. Unhealthy impulses/desires are effectively discharged in a controlled manner through vicarious stimulation.

But horror fiction acts not only as a release valve for underlying psychical pressure; such works also addresses everyday fears common to the human condition—areas of unease such as mortality, Apollonian/Dionysian conflict, social strife, anxieties concerning sexuality and reproduction, etc. By affording us the opportunity to confront these subjects in a controlled manner, horror fiction acts as counter-phobia, focusing fear as a means of overcoming it. This is akin to the process of habituation, in which a person comes to respond less intensely to a stimulus in the wake of repeated exposure to it. Many variables come into play, and there is no guarantee that such exposure won’t result in further sensitization—therefore some people find nothing beneficial in the effect of horror fiction. But assuming we do respond in a positive manner, it is within the power of such works to help us become better adjusted, happier individuals.

Aside from its cathartic aspects and its ability to renew personal and collective perception, horror fiction also works on a more obvious, unsettling level. At the forefront of consciousness, even though we aren’t likely to admit it, we know we like to participate in the weirdness—even if only in a passive sense. Stephen King acknowledges that “[Horror] offers us a chance to indulge in deviant, antisocial behavior by proxy—to commit gratuitous acts of violence, indulge our puerile dreams of power, to give in to our most craven fears” (Danse Macabre, 43). On a base level, the attraction of horror is not unlike that of a sexual fetish—deviously intriguing. Therefore it seems no coincidence that such fiction frequently expresses themes of sadism, masochism, unnatural and seemingly insatiable lust, physical and emotional degradation, and so on. In fact, our most firmly established horror figures and conventions are absolutely loaded with sexual energy (a topic we will expand on in chapter three). Ever found yourself rooting for a monster/violator? Sure you have. Now ask yourself why that is.

Continuing this line of thought, while horror fiction effectively lifts the constraints of social, sexual, and moral codes for our entertainment, it simultaneously reinforces the established order as well. (This should come as no surprise, as fear has been employed throughout human history as an effective means of control, both oppressive and motivational. Right wing employment of fear of the outsider or “other” is a classic example.) Appearing in cultures the world over and frequently corresponding with Jungian archetypes, horror images and narratives have roots in various mythical and spiritual belief systems. By depicting the horrific consequences of indulging in unproductive, tabooed behavior, such fiction is socially instructive; a mechanism for perpetuating the laws and values of the collective. Thus the young woman who becomes a bit too familiar with the men folk finds herself deceived by a demon in disguise. The man who attempts to play God deludes himself, his efforts resulting in abomination and ruin. Those who push too far beyond the boundary of that which is known come to pay a terrible price. James B. Twitchell notes that “These sagas, while not necessarily making the right predictions about future life, are memory banks of social and sexual possibilities both for the individual and the group. They show exactly what will melt down the nuclear family” (Dreadful Pleasures, 104). In that they are prescriptive as well as entertaining, works of horror present themselves as a fascinating means of maintaining societal order.

But works of horror fiction act not only as a means of coping with the anxieties of a particular culture or era; they also function as a means of responding to such anxieties. As Michael J. Collins points out, “[Horror] acts as the voice of every successive generation, and tailors its approach accordingly” (A Dark Night’s Dreaming, 121). For example: more recent works of horror clearly reflect a heavy postmodern influence. These stories have become increasingly self-referential, emphasizing a sense of tradition in response to the ever more fragmented and compartmentalized conditions of modern life. Also, the ever more graphic depictions of violence and gore in such fiction can be seen as representative of the devalued conception of the individual in the modern world. The focus has turned more and more toward the complete and utter helplessness of the individual in the larger scheme of the universe, existing at the mercy of forces beyond comprehension.

If anything is absolutely certain about works of horror fiction, it’s that they touch us in a very personal way, and what we take away from that experience—whether positive or negative—is very much our own. (This is a very special phenomenon in a day and age when people go about their lives in a relatively numb and detached state. To feel anything, even fear, is like a breath of fresh air—invigorating, rejuvenating. Fear is a wonderful reminder that we are indeed alive.) Aside from allowing for escape from the confines of modern life, and providing an outlet of release for underlying psychical pressures, horror fiction has the power to facilitate personal and collective change in anticipation of the future. Such works have a great deal to teach us about ourselves if we are willing to open ourselves to the experience, and if the price of that knowledge is a little scare, then so be it.

Buy The Art of Darkness here.