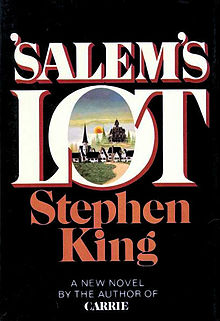 I recently revisited an old favorite and thought I’d sit down and share some thoughts on it.

One cannot meaningfully discuss the overall effect of Stephen King’s ‘Salem’s Lot without considering the concept of horrific metonymy. The idea, as you may already know, is a simple one: that an antagonist can be rendered more frightening through the introduction/juxtaposition of grotesque, disturbing elements.

Take for instance the Marsten house, the vampire’s nest and the central image of ‘Salem’s Lot – the rotten tooth of Ben Mears’s mind – looming above the town like some black idol, watchful, seemingly imbued with a life of its own.

But an old house is just that: an old house – until it is made something more. This is where King excels. He sets the house up as the focal point of old town scandal and rumor. First we learn of the murder-suicide of the house’s previous owners, Mr. and Mrs. Hubie Marsten. Then there is the later revelation of Marsten’s possible involvement in the abduction/sacrifice of several area children, for the purpose of strange, unnatural rites. The house, through its owner’s evil doings becomes a kind of supernatural beacon – evil calling out to other evil.

Then we come to the vampire himself.

Unlike the feral creatures of folklore, Kurt Barlow is modeled on Stoker’s original bloodsucker – in both appearance and nature, strengths and weaknesses.

“In the faint light, Corey saw a middle-aged man with a black moustache and deep, bright eyes… The stranger struck a light, and in the glow of the wooden match he saw that the stranger’s cheekbones were high and Slavic, his forehead pale and bony, his dark hair swept straight back.”

He is the epitome of evil, all that is unnatural and unclean. This is established from the beginning, as Straker (Barlow’s human familiar) sacrifices young Ralphie Glick in order to appease the devil and thus facilitate the vampire’s passage into the Lot:

“O my father, favor me now. Lord of Flies, favor me now. Now I bring you spoiled meat and reeking flesh. I have made sacrifice for your favor. With my left hand I bring it. Make a sign for me on this ground, consecrated in your name. I wait for a sign to begin your work.”

This unholiness  is expanded on in later chapters, as Barlow introduces himself to our band of slayers:

“My rites were old when the rites of your church were unconceived…. I am not the serpent, but the father of serpents…”

Like Dracula, Barlow feels connection with the meaner creatures, thus accentuating his own brutality:

“I love the predators of the night. The rats… the owls… the wolves.”

Barlow, as a super-predator, holds immense power over his victims, further divorcing him from humanity. Take for example his ability to hypnotize:

“The eyes were wide-set, and still rimmed with the dump’s sullen fire. There was no way you could look away from them… Those eyes seemed to be expanding, growing, until they were like dark pits ringed with fire, pits you could fall into and drown in… There was something… pleasant about this. Far away he seemed to hear sweet voices singing foul words. Silver chimes…. white faces… It was like drowning. Drowning in the old man’s red-rimmed eyes… As the stranger came closer, Dud understood everything and welcomed it, and when the pain came, it was as sweet as silver, as green as still water at dark fathoms.”

King has used hypnosis to chilling effect elsewhere – in his short story “The Raft,” for example, where the seemingly harmless creature draws its prey in with swirling, hypnotic colors along its surface, only to eat them alive. The imagery stirs a primal dread, reaching far back into mankind’s collective memory banks.

There is also, of course, the idea of the vampire as plague. The symptoms of vampirism present themselves at first like acute anemia – just as in Dracula. Barlow is the carrier, and the contagion is transmitted geometrically. Perhaps most disturbing is the chapter in which King takes us on a tour of the town, describing the vampires’ daytime hiding places, in their various stages of transformation. It becomes clear just how prevalent the epidemic is. (It is worth noting that the historical spread of vampire folklore coincided with the spread of the plague across Europe. Vampirism was an idea propagated by the Catholic Church to explain away illness and consolidate their power/influence.

But King ultimately resolves to a supernatural cause – vampirism as curse – exemplified in Father Callahan’s reaction to being forced to consume Barlow’s blood. He finds himself damned, unable to enter into the house of God, burning his hand on the door of his church. And in the book’s final pages, as Ben Mears surveys the town, his gaze settling on the cursed Marsten house, he wonders:

“Did they wander, pallid, through its nighted halls and hold revels, twisted services to the Maker of their Maker?”